Gold futures rallied above $1,500 an ounce on sustained demand for the traditional haven as the U.S.-China trade war festers, global growth slows and central banks around the world ease monetary policy.

The metal advanced as much as 1.3% to $1,503.30 an ounce on the Comex, the highest since 2013. The move extends this year’s climb to 17%, with gains underpinned by inflows into exchange-traded funds. Central banks in India and New Zealand both surprised markets on Wednesday with bigger-than-expected interest rate cuts, boosting speculation others will follow. Silver surged.

Gold has been one of the chief beneficiaries of the turmoil in global financial markets as Washington and Beijing spar over trade. In recent days, the Trump administration threatened fresh tariffs against Chinese goods, the yuan was allowed to sink, and the U.S. branded China as a currency manipulator. The stand-off has boosted the odds of more easing from the Federal Reserve.

“Gold is serving its traditional role as a safe-haven asset,” said Wayne Gordon, executive director for commodities and foreign exchange at UBS Group AG’s wealth management unit. Under the bank’s risk case, marked by a further escalation of the trade fight, prices could go as high as $1,600, he said. 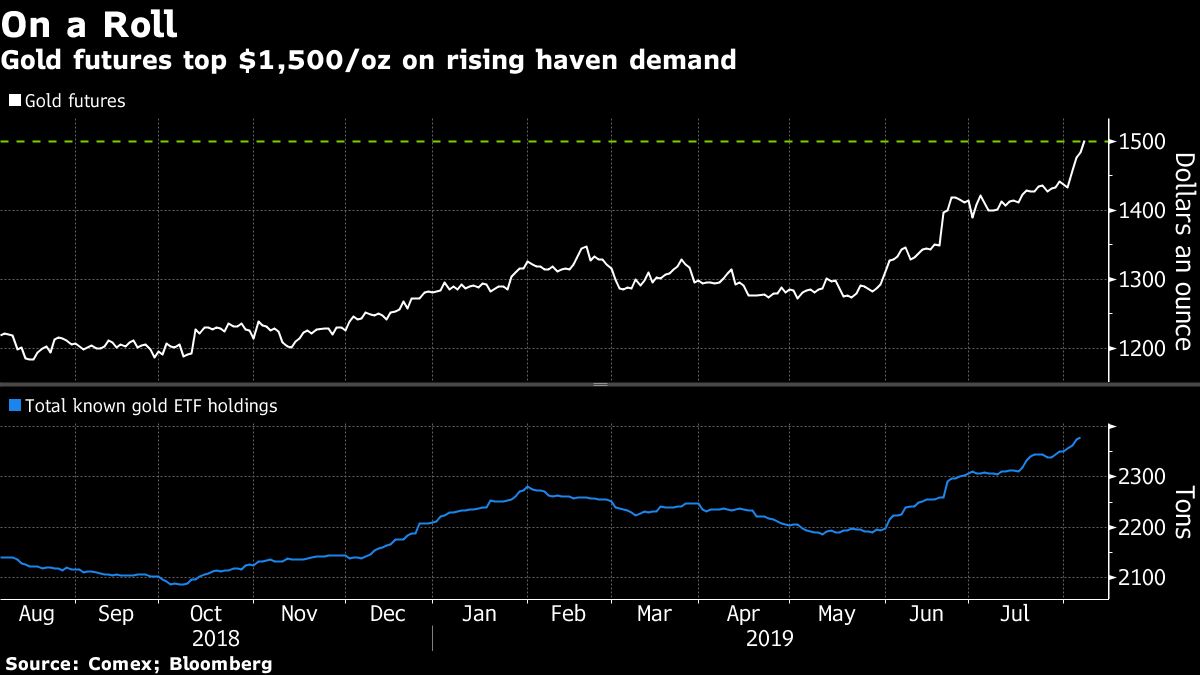 Last month, the Fed reduced borrowing costs for the first time in more than a decade, responding in part to the impact of the trade war. Lower rates boost the appeal of non-interest-bearing bullion. Goldman Sachs Group Inc. expects that there will be a total of three U.S. rate reductions this year.

The latest ructions have sent investors rushing to havens, pushing the world’s stockpile of negative-yielding bonds to a record, with the market value of the Bloomberg Barclays Global Negative Yielding Debt Index closing at $15.01 trillion Monday. The yield on 10-year Treasuries has tumbled.

Bullion has plenty of fans among veteran investors. Mark Mobius said in July prices were poised to top $1,500 as interest rates headed lower, declaring: “I love gold.” Billionaire hedge-fund manager Ray Dalio has suggested the market may just be at the start of a period that would be very positive for gold.

In addition to the challenges thrown up by the trade war, there are other risks. In Europe, investors are tracking the chances of a no-deal Brexit later this year, while there are tensions in the Middle East between Iran and the U.S.

Further support for the rally has come from central-bank buying, with authorities in China, Russia, Poland and Kazakhstan all boosting holdings.

“The unfolding of events since President Donald Trump’s tariffs threat have further diminished the likelihood for a U.S.-China deal in the medium term,” Jingyi Pan, a strategist at IG Asia Pte in Singapore, said in an email. “Given such a backdrop, the natural course of action is perhaps of no surprise to adopt a flight to safety, with gold prices still expected to see further upside.”

Who Else Wants Someone to Write My Essay For Me?

How to Use a Paper Essay Checker