Oil rebounded from the lowest level since January after Saudi Arabia contacted other producers to discuss options to stem a rout that’s been driven by the worsening U.S.-China trade war.

Futures rose as much as 3.4% in New York, clawing back much of Wednesday’s 4.7% plunge. Saudi Arabia won’t tolerate continued price weakness and is considering all options, according to an official from the kingdom who asked not to be identified. That came after a surprise increase in U.S. stockpiles, the first gain in eight weeks, which helped push down prices on Wednesday.

Crude has fallen around 10% this month as a deterioration in relations between the world’s two biggest economies worsened an already bleak consumption outlook. Growth in global oil demand is slowing and won’t exceed 650,000 barrels a day in 2019, according to Vitol Group, the world’s largest independent oil trader. Bullish factors look pretty scarce now that American stockpiles have stopped sliding and tension in the Persian Gulf seems to have receded.

“The market is looking for how these big oil producing and oil exporting countries react to the big sell-off that we’ve seen,” said Edward Bell, director of commodity research at Dubai-based bank Emirates NBD PJSC. 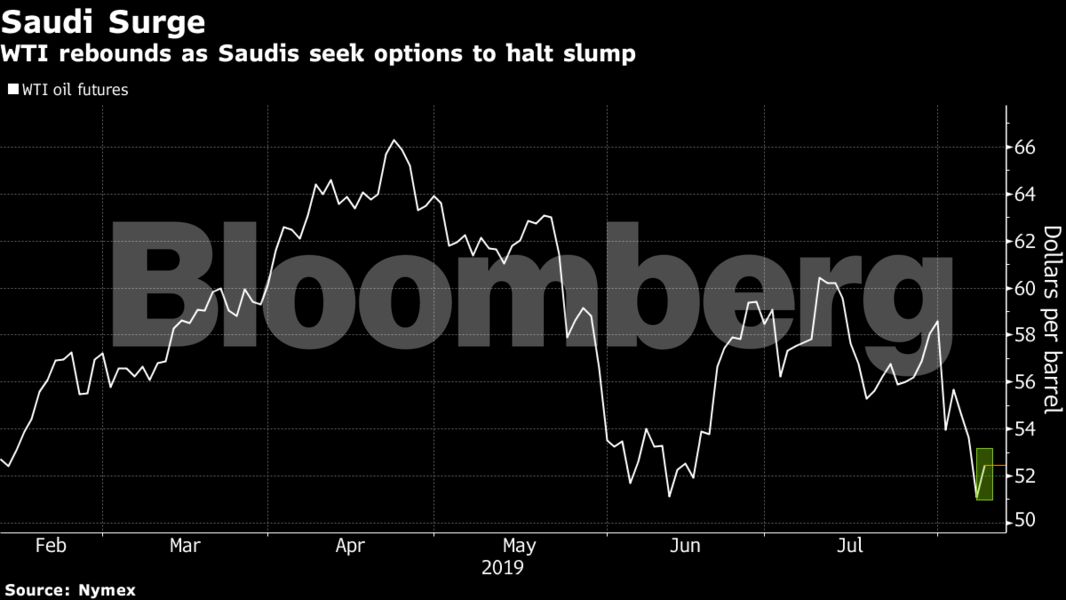 Saudi Arabia, the world’s largest oil exporter, has already cut production more than required under an agreement between the Organization of Petroleum Exporting Countries and allies. Planned gatherings in Abu Dhabi early next month will be critical for leaders of the OPEC+ group, especially the Saudi and Russian energy ministers, to signal their intentions on production, said Helima Croft, chief commodities strategist at RBC Capital Markets.

U.S. nationwide crude inventories rose by 2.39 million barrels in the week through Aug. 2, compared with the median estimate for a 2.7 million barrel decline in a Bloomberg survey. Gasoline stockpiles also climbed, an alarming development during what is typically the peak summer driving season.

Vitol Group’s Chief Executive Officer Russell Hardy said in a Bloomberg TV interview that oil markets are focused on the trade war, while “slightly under-pricing” the risk of supply disruptions in the Persian Gulf. Weak demand in established markets is spurring the company to focus on emerging economies, he said.

“Oil prices have clawed back some losses, but the sentiment remains overly bearish,” Stephen Innes, managing partner at VM Markets, said in a note. “The big question remains: will the verbal intervention be enough to stem the tide, or will oil traders use this opportunity to increase short positions.”